A little while ago, our Wishing Well programme with people with dementia was featured on BBC South East. Shortly after, we received a very moving letter from the daughter of one of our participants, thanking us for, “giving me my Mum back, albeit briefly”. She had seen her Mum on the film, smiling gently and singing song lyrics with our musicians. Her response was subtle, but showed more engagement than her daughter had seen in many months. It brought her comfort to know that her Mum could still experience joy.

It takes skill to create a musical interaction on a busy hospital ward; to work with someone with dementia to find that song from their personal sound track that holds so much meaning for them it brings them back into the world. Our Musicians in Healthcare are all professionals. We have in depth training and a strong vocation to do this work as well as a deeply held belief that no-one is beyond the reach of music, based on personal experience of hundreds of interactions and a growing evidence base from the media and academia.

Our new short film, funded by Arts Council England and made by Sarah West of West Creative explores how we use music making to build a bridge across the anxiety and isolation that the condition causes and to help people connect with the world around them again. One Nurse described this as like “watching a flower unfurl”. I hope the film encapsulates that.

Music in Healthcare, Foundation Training course to be held in Sussex, 31st March to 6th April 2016.

This is a fantastic opportunity to explore live, interactive music making in hospitals and other healthcare settings for children and young people. The course will introduce you to the thinking behind using music to enhance wellbeing and to enrich the sound ecology of clinical spaces.

The deadline for applications is Friday, January 22nd 2016.

How does live music making help people regain a sense of control in Hospital?

Thank you to BBC South East Today and BBC Children in Need for choosing our Wishing Well Music in Healthcare programme to highlight on the news. We are thrilled to be supported by Pudsey Bear so that we can continue to bring music to sick children at the Royal Alexandra Children’s Hospital. Thanks to the wonderful children, families, doctors and nurses of the High Dependency Unit for being a part of the film.

“And so the music plays” A new blog by Lucy Frost, Dementia Specialist Nurse and Wishing Well music champion

Several months ago we arranged screenings of the documentary film Alive Inside to NHS and social care colleagues, as well as members of the public.  The aim was to use the messages about the potential power of music in making a connection with a person living with an advancing dementia.  We hoped this would help health professionals think about how to use music in the care settings in which they were based to help start interactions with people they were supporting.  We hoped that people working in the dementia care field would meet other interested colleagues, get talking to members of the public who came, and share experiences and ideas. 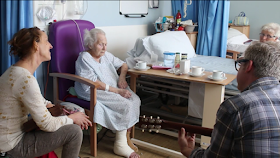 I know, from working alongside people with dementia and their carers as I do, that music can be emotional.  However, reconnecting with these emotions triggered by hearing a favourite song or piece of music is indeed so powerful it can actually bring someone back to reconnecting with who they are.

Over 500 people attended the screenings, and we received hundreds of ‘pledges’ from people letting us know what they might do to bring more music into the lives of people living with dementia.  This included a local care home investing in personal music players for residents, and a local community choir going into local care homes to sing with people (Note the sing with / not for)  This was all about music with people with dementia, and making it personal.

At around the same time, Wishing Well Music in Healthcare, a local progranme delivered by Rhythmix music charity had begun to work with people with dementia in hospital.  This project was supported by the Dementia Care Team at the hospital, and had a small amount of funding.

I met with Jo White from Wishing Well, and quickly came to the realisation I had to do whatever I could to support this project, and make it count.  Hospital can be a difficult place for a person with dementia, and this was something that could lighten the mood, and change the space.

We were so moved by the impact the sessions have had on the people who have been involved, people living with dementia and those caring for them, we decided to make a film about it!  Sarah West , a local Brighton based film maker agreed to help us, and the people you see in the film were very generous in allowing their experiences to be shared.  Go to our “Film” tab to see the result!

Projects like these can only be continued where there is funding to support them, and the sad fact is there is just not enough music playing in the lives of people with dementia, particularly those people who can no longer always rely on spoken words.

The impact of music seems to be such that it enhances wellbeing.  Music as a recognised intervention for communicating with a person with dementia, is an area that requires ongoing research and evaluation.  It may then become clear how using music in the right way helps make better outcomes for people.  As the evidence base grows, so does the case for bringing music into hospitals and care homes routinely.

No one should be denied the opportunity to  reconnect with their own personal playlist, which is the soundtrack to our feelings and memories – The Wishing Well Project can do much more with the right support to make it happen.

We are absolutely delighted to announce that BBC Children in Need has awarded us a grant of £19,417 to support our work at the Royal Alexandra Children’s Hospital in Brighton!

Our team of Musicians bring much needed distraction and stimulation, right to the bedsides of  children, young people and their families who are spending long periods of time in Hospital. We bring a sense of the outside world into the Hospital ward through singing familiar songs and creating a very child centred activity.

One parent commented: “My heart skips a beat when I hear the Musicians on the ward as I know that my son will have a moment of quality time that he loves”.

Our Chief Executive, Mark Davyd writes said “This project is very personal and important to me and to the musicians who deliver the Wishing Well programme, and we are delighted it has been chosen to be supported by BBC Children in Need. As a child, I spent a great deal of time in hospital and found it an incredibly frustrating and numbing experience which distanced me from friends and family. The music creates a bridge to the outside world, introducing the human element back into what can be a very sterile environment. With the help of BBC Children in Need, we will be able to put smiles back on to the faces of children and their families during very difficult and challenging times”.

Our thanks as always go the inspirational staff at The Royal Alexandra Children’s Hospital who have supported and guided our programme, made music with us on the wards and on occasion danced in the corridors. We are looking forward to a fantastic year working with you all!

Kate Murdoch, reflects on the importance of good team work with clinical staff, in her role as Musician in Healthcare at The Royal Alexandra Children’s Hospital, Brighton:

One of many encouraging developments in the Wishing Well Programme at theRoyal Alexandra Children’s Hospital in Brighton, has been the growing element of team-working with clinical staff, particularly in the high dependency unit (HDU).

The children and young people in the HDU are in a critical condition, and as musicians we have to be very sensitive to the medical needs of patients, whilst also respecting the personal space of patients, parents and carers at the bedside. Staff members really understand now that we are not musical entertainers, but a flexible resource of musicians capable of connecting with a wide range of patients and situations to help promote human connection, empowerment and creativity during challenging times.

Key to this development has been briefings with clinical staff before we go on the wards, and increasing referrals asking us to visit individual children. The background information about patient’s situations, and what’s happening on the day, has been essential in helping to focus our musical interactions in a way that can most benefit patients. It has certainly been a learning curve for me in terms of flexibility as a musician, including finding creative and sensitive ways to connect with people during critical situations, including young patients who are at the end of life.

Another area of personal growth has been an increasing awareness of the importance of the sound environment in ward areas. There’s been significant improvement in the appearance of clinical spaces in hospitals with pictures, decorations and softer lighting. However, the ‘sound ecology’ of wards has received less attention, and for young patients it can be an very alien environment of beeping machines, wheeled equipment and adults moving and talking in a way different from home.

“We try very hard to reduce the amount of invasive sound…but the reality is that this is a Critical Care area. Small children lying in bed are surrounded by monitors alarming, fluid pumps alarming and anxious voices. Having calming sounds that they can use to tune away from us can help significantly reduce their distress.”
Janet Lee, Critical Care Practitioner, The Royal Alexandra Children’s Hospital.

It’s an area ripe for further development, and it’s good to know that the Wishing Well Programme is already helping by bringing soothing and uplifting sounds into the wards.

We are thrilled to present our new short film capturing the Wishing Well Musicians at work at the Royal Alexandra Children’s Hospital in Brighton. Huge thanks to the staff and families on the High Dependency Unit and to film maker Gani Naylor. Tell us what you think?